Just when it seemed like James Harden to the Brooklyn Nets was pretty much confirmed, the Rockets came out and said they wouldn’t trade Harden to the Nets unless they were getting Kyrie Irving or Kevin Durant in return. So essentially, James Harden is not going to the Nets. But what other options does he have?

James Harden has told the Rocket’s front office that he just wants to be traded to a contender. Now, that does give him a lot of options and I believe the Miami Heat, Milwaukee Bucks, and Philadelphia 76ers are now the favourites to sign Harden. So let’s talk about what each team has to offer and which trade makes the most sense for both teams.

Starting with the Miami Heat, they have a lot of young talent that they could trade for Harden, but it’s whether they want to trade for him. The Rockets have come out and said that they’re looking to trade Harden for some young talent, so they may be after Bam Adebayo and Tyler Herro. I imagine there’d also be some draft picks involved, but this trade could benefit both teams. The Heat would have the duo of Jimmy Butler and James Harden which would make them an even stronger contender than they already are. Then the Rockets would have one of the best young centers in the league, Bam Adebayo, and Tyler Herro who could start as their 2 guard. The Rockets will probably not be as good as they were last season but it would get rid of Harden who we know doesn’t want to be in Houston.

Then we’ve got the Milwaukee Bucks who, truth be told, don’t have a deal as good as the Heat to offer. Giannis is obviously out the question for trade options. They don’t really have any young stars that the Rockets would be interested in but I suspect the Bucks would be open to trading Khris Middleton along with some other younger players and draft picks. Whether the Rockets would be happy with this is another question.

Then finally, we have the Philadelphia 76ers who have said they’re open to trading Ben Simmons but I don’t see how this would help the Rockets. They already have their point guard, John Wall, so I’d be surprised if they make this trade unless they trade John Wall elsewhere. There is the possibility that they would trade for Joel Embiid but I’d say this is very unlikely at this point in time, but not impossible.

All in all, I think the Miami Heat are the favourite to sign James Harden at the moment or he could end up staying with the Rockets for another season if they don’t deem the trade worthy. Whatever team he’s on though, I just hope we get to see the same dominant scorer that we’ve seen for the past 3 seasons. 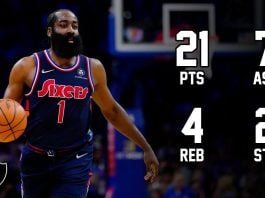