The Canadian men’s national basketball team may be forced to miss the FIBA AmeriCup Qualifiers later this month due to COVID-19 concerns.

Canada is currently 1-1 in Group C and is scheduled to play Cuba and U.S. Virgin Islands on Nov. 29 and Nov. 30, respectively.

One possibility is Canada forfeiting both of those games in the November window, which would mean they would have to win their two games in the February window, according to Michael Grange of Sportsnet.

However, if Canada got upset in one of those games, their bid to the 2024 Olympics would end.

Canada also needs a top three finish in their group in order to advance to the 2022 FIBA AmeriCup.

FIBA has a general meeting set for Nov. 6 where they will decide whether or not to postpone the event and if the event goes on as planned, it’s almost certain that Canada won’t be there.

Canada hasn’t medaled at a world event since 1936, but they could put together quite the team, as there is a long list of NBA talent, including players like Jamal Murray, Shai Gilgeous-Alexander, RJ Barrett, Dillon Brooks, Kelly Olynyk, Dwight Powell, Tristan Thompson and Andrew Wiggins. 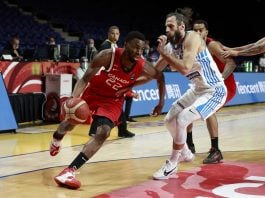