Milan Macvan to re-join his former team, Kostas Vasileiadis found a new employer and Miami Heat rookie struggling to get used to the NBA ball. That and more in today’s gossip.

MILAN MACVAN TO RETURN TO PARTIZAN?

Serbian forward will not move to the NBA and could be headed back to his homeland following a spell in Turkey with Galatasaray.

It would the second time for Macvan in Belgrade as he has already played for Partizan in 2011-2012 season on loan from Maccabi.

COACH K NOT THINKING ABOUT HIS OPPONENTS

Team USA has already moved to Spain to finish their preparation for the coming World Cup by playing a final friendly with Slovenia.

The World Cup starts this week but Mike Krzyzewski is concentrating on his team’s preparation rather looking at his opponents.

“We are not thinking about other teams, we just think that we are good enough to play with everyone.”

Kostas Vasileiades is set to return to Spain after agreeing terms with Unicaja Malaga. He is expected to sign 2+1 deal with the club.

He last played in Spain with Bilbao before moving to Anadolu Efes.

Shabazz Napier is struggling to make a transition from NIKE basketball used in NCAA and Spalding ones that are played with in the NBA.

“I just want to continue to get better at everything,” Napier told the AP. “But my biggest thing is getting comfortable with that basketball. That’s one of my biggest problems and it’s kind of ironic, because it’s a basketball. But it’s different than a college basketball.”

“The funny thing is, I never really touched an NBA ball until I left school,” Napier said. “I told myself I never wanted to. I felt like it was superstitious, like something bad was going to happen, like I had to earn it. I never touched it and it’s definitely different. This ball is leather and the biggest thing for me now is getting comfortable with it.” 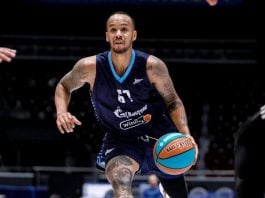