So, James Harden dropped a bombshell on us all in a recent chat with legendary basketball writer Scoop Jackson. Maybe you trim your beard a little, James. It might be going to your head a bit.

Scoop: Bottom line, you are on this team and a lot of players aren’t, but in your mind, who is the best basketball player alive right now?

Scoop: That’s what I was about to say, “including you.” You made that sound like it was an easy answer.

Harden: It is. Myself.

Scoop: Then here’s the question: Are you where you want to be basketball-wise, even if you are the best?

Harden: Nowhere near close. I’ve got a long way to go, a lot of learning to do, improvements to make. Um, you know, as long as I’m listening and focused on the right things, I can reach my potential.

Scoop: So in your mind, you haven’t reached [your potential] yet?

Harden: Not even close.

Walter Hodge and Laboral have decided to part ways, but already interest is growing for Hodge’s signature.

Bayern Munich and Zenit St. Petersburg are the two frontrunners to secure Hodge for next season. Both clubs have reportedly announced their intentions. Time will tell, we guess.

STOUDEMIRE TO THE SIXERS?

The New York Knicks are reportedly thinking of trading Amar’e Stoudemire to the Philadelphia 76ers by the February deadline.

What happens if the 76ers don’t meet the minimum at the trade deadline? They would be required to pay their existing roster the shortfall on a schedule agreed to by the Players’ Association.

So if the 76ers don’t meet the minimum, their existing guys get bonuses and the team gets to defer paying it until the end of the season.

What’s far more likely is that the long rumored Amar’e Stoudemire to Philadelphia deal gets done at the deadline. The Sixers take on Stoudemire’s $23 million salary cap number, which pushes them way over the minimum. They would only owe him roughly 30 percent of his remaining contract, so they’d end up paying him $7 million in cash and likely extract a draft pick or a rookie scale player for their troubles.

Flexibility in the NBA is currency – both figuratively and literally. The 76ers will likely meet the floor; they just are not incentivized in any way to do it before the trade deadline. 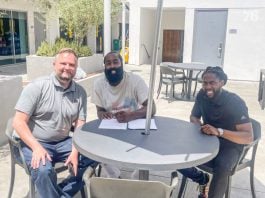 Skip Bayless: “James Harden did something Russ is incapable of doing”

James Harden and the Sixers have agreed on a deal James Harden: “I don’t really listen to what people are saying”