What a whirlwind: It seems as though pro basketball’s period of free agency/roster-shuffling transactions has barely begun, as though just yesterday Lebron James was a member of the Miami Heat. Yet excepting Cleveland Cavaliers fans counting the days to completion of the Kevin Love deal, watchers of the NBA’s wheeling and dealing must now sadly accept that the dust has settled for the off-season.

So let’s talk next season! Under current terms of contract, some 10 of Europe’s NBA players could become free to play the market next summer. In general, the list is fairly impressive if not Lebron-level earth-shattering. Said list includes the following.

Omer Asik, New Orleans Pelicans. Conventional wisdom holds that contract year, i.e. the season leading into a given player’s plunge into NBA free agency, equals good year; the Turkish big man could well be a proving ground for the supposition in 2014-15. Requesting a trade directly after the Houston Rockets’ signing of Dwight Howard, Asik finally got his wish this summer with the move to New Orleans. He’ll be earning his $8.3 million-plus this season as a starter certain to be among the team’s leaders in minutes played: Despite an exciting young roster which includes Anthony Davis, Tyreke Evans, Eric Gordon and Austin Rivers, the Pelicans simply don’t have much coming off the bench – and an extreme paucity of rebounders.

Andrea Bargnani, New York Knicks. Oh, Andrea. Now that Phil Jackson will ostensibly be tempering the excesses of Knicks owner James Dolan, who will pay you anything approaching this year’s $11.5 million in exchange for a mediocre 13 to 15 points per game? Also, is this the worst contract in the NBA this season?

Marco Belinelli, San Antonio Spurs. Forget about the specifics of next season: Belinelli’s 2013-14 stint with the champion Spurs saw this Italian find his niche after six sometimes uncomfortable seasons with four different NBA teams. Posting career highs in efficiency and shooting percentage in all three areas, Belinelli certainly now thinks of San Antonio as home for the foreseeable future. Add in the fact that no player seems to depart Coach Popovic’s Spurs willingly and Belinelli looks like a lock to stay for years.

Luol Deng, Miami Heat (player option). With a pair of crucial offseason signings of Pau Gasol and Nikola Mirotic plus the re-reemergence of Derrick Rose-as-superstar on tap, the Chicago Bulls appear to have come out OK in Deng trade of last season that had Tom Thibodeau and Joakim Noah a bit miffed. Deng, meanwhile, was presumably able to name his own price – terms of the deal were undisclosed – this summer with the Lebron-less Heat. While Miami team president Pat Riley may been hyperbolizing with his proclamation that “Signing Luol Deng is one of the most important free agent signings that we have ever had in the history of the franchise,” a backcourt of Deng teamed with Chris Bosh and Josh McRoberts is a potential matchup nightmare for many clubs. One can easily imagine an All-Star caliber year out of Deng – and even more easily foresee him exercising the player option to live in sunny climes for another.

Goran Dragic, Phoenix Suns (player option). Forces from both sides will pull at Dragic heading into an option year: The future looks bright in Phoenix and Dragic’s ascendancy has likely not yet have peaked. At a $7.5 million salary for 2014-15, the Slovenian is the Suns’ highest paid player, but at $7.5 million he’s a bargain in the current NBA landscape. Assuming Goran puts out anywhere near last season’s numbers (20.3 points, 5.9 assists, 1.4 steals per game) in this year’s campaign, the point guard will get to choose between loyalty and, say, Lakers-level pay.

Marc Gasol, Memphis Grizzlies. Now here’s a name we’ll be talking about next summer. Gasol the Younger has established himself as an elite NBA center and defensive stud with the Grizzlies. One imagines the Memphis front office *right now* contemplating how to return the team’s marquee name, a guy already commanding a top-20 salary just a smidge above Kevin Love at $15.8-plus million for this season. Who would’ve thought back in 2008 that this guy would eventually be the object of a bidding war between perhaps a half-dozen NBA sides in 2015? Mark it down; it’s happening.

Jonas Jerebko, Detroit Pistons. Talk about your career-year breakout potential in 2014-15, and you’ve got to enter Jerebko in the discussion. Through four years with Detroit, the Swede has seen a consistent-cum-precipitous drop in minutes; on the other hand, since the Pistons’ offseason moves were all about acquiring shooters and more shooters (e.g. D.J. Augustin, Jodie Meeks), we might yet see Jonas in the starting lineup for the first time since 2012 on opening day. The real wild card in Jerebko’s future plans would have to be the Pistons’ new team coach/president Stan Van Gundy. Depending on the inevitable future acquisitions, Jerebko could well be part of a trade during the regular season – or could start every game for Detroit and be re-signed. Without an uptick on that 11 minutes per game, though, he (perhaps fairly) won’t be able to sign elsewhere for his true value in the NBA.

Andrei Kirilenko, Brooklyn Nets. Wow, that lowball contract AK-47 signed with Mikhail Prokhorov’s Nets last year seems even more suspicious now, doesn’t it? At the mid-level exception rate of $3.1 million – chump change for the Russian billionaire and his free-spending NBA enterprise – Kirilenko had a season to forget in Brooklyn. Time will tell if 2013-14 marked the indication of downturn for the uniquely skilled one or merely an injury-riddled blip non-indicative of a few more years of quality play, but either way next year’s expected jump of Bogdan Bogdanovic to the Nets would seem to have triggered the ticking clock on Kirilenko’s time in the Big Apple. Perhaps another turn with CSKA Moscow is in his near future…?

Ricky Rubio, Minnesota Timberwolves. Sure, La Pistola has been shown to be limited as a shooter in the NBA – a reputation that may be accentuated without Love to clean up the offensive glass any more in Minnesota – but wouldn’t a departure in 2015 bode ill for the Timberwolves going forward? The truth is that Rubio has, along with Love, been one of the few reasons to pay attention to a squad perpetually labeled with also-ran status since Kevin Garnett set his sights on a championship elsewhere while the Timberwolves are dangerously close to being looked upon as a feeder club. Reportedly, the ‘Wolves front office is already negotiating an extension with Rubio, offering $44 million for four years, essentially a doubling of his current pay – though Ricky’s agent is holding firm in seeking a five-year deal. Here’s to thinking that Rubio gets his five years even if he too hits the road to do so: 30% shooting be damned, lots of clubs could easily add those 8.5 assists per game at such a price.

Kevin Seraphin, Washington Wizards. Exciting things are happening in Washington, not the least of which from a European hoops fan’s perspective was the reupping of Marcin Gortat this summer. Unfortunately, the team’s future plans – including the rumors that the Wizards will make a go at Kevin Durant in 2015 – already apparently do not involve Seraphin. After Gortat, new signee Kris Humphries is penciled in to get time at the center spot, while Washington also has big bodies at the PF spot in Nene and DeJuan Blair, plus Drew Gordon’s aboard for this season as well. Come 2015-16, we may be seeing this Frenchman playing Euroleague ball. 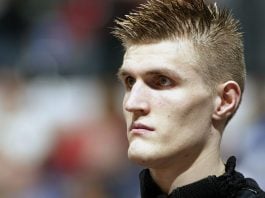